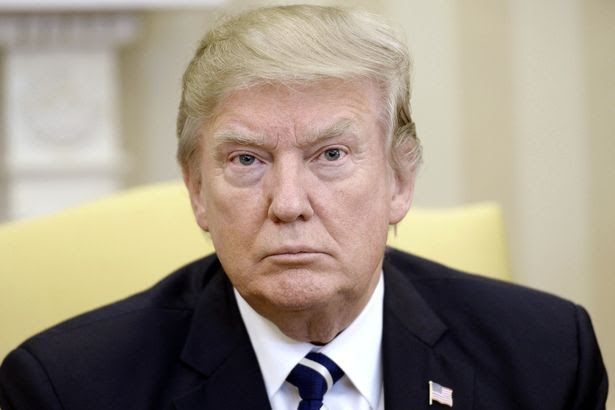 The United States has launched a huge military strike on Syria following a sickening chemical attack, officials confirmed.
Dozens of cruise missiles were launched from
US Navy destroyers at an airbase in the country in the early hours of Friday morning.

Facing his biggest foreign policy crisis since taking office in January, Donald Trump took the toughest direct US action yet in Syria's six-year-old civil war, raising the risk of confrontation with Russia and Iran, Bashar Al-Assad's two main military backers.
The Pentagon confirmed that the US had informed Russia ahead of the airstrike.
Some 59 Tomahawk missiles were launched at a target identified as the Shayrat Airfield in Homs.
The US military also targeted Syrian aircraft, an airstrip and fuel stations in its cruise missile strike.
A Syrian military source said the strike had led to "losses."
"One of our air bases in the central region was exposed at dawn today to a missile strike by the United States, leading to losses," according to Syrian state TV news.
Trump confirmed he ordered the strikes just a day after he pointed the finger at Assad for this week's chemical attack, which killed at least 70 people, many of them children, in the Syrian town of Khan Sheikhoun.
The Syrian government has denied it was behind the attack.
The President said:
"Assad choked out the lives of helpless men, women and children. It was a slow and brutal death for so many.
"Even beautiful babies were cruelly murdered in this very barbaric attack.
"Tonight I ordered a targeted military strike on an airfield in Syria from which the chemical attack was launched.
"I call on all civilised nations in seeking to end the slaughter and bloodshed in Syria.
"It is in the vital national security interest of the United States to prevent and deter the spread and use of deadly chemical weapons.
"There can be no dispute that Syria used banned chemical weapons, violated its obligations under the chemical weapons convention and ignored the urging of the UN Security Council."

CLICK TO PLAY
WATCH NEXTCot simulates movement of a car to get babies to
LITTLE BOY GASPS FOR BREATH SURROUNDED BY DEAD BODIES
Trump, who was attending a summit with Chinese President Xi Jinping at his Florida resort, said earlier on Thursday that "something should happen" with Assad as the White House and Pentagon studied military options.
France, the US and the UK have called for a vote at the United Nations on a Syria resolution.
World leaders and human rights campaigners have called for an investigation into the alleged war crime.
A source earlier told CNN that Trump was "discussing possible actions with Defense Secretary James Mattis."
The Pentagon has reportedly presented its long-held plans for striking at Syrian targets to the White House.
However the Syrian government has set conditions for any international probe, saying it must not be "politicised" and should set out from Damascus and not Turkey.
Foreign Minister Walid al-Moualem said the government would only decide on the idea once its concerns were addressed.
While Western countries have blamed the Syrian government for the atrocity, Russia - Syria's strongest ally - claimed the deaths were caused by a gas leak from a depot where rebel groups were storing chemical weapons, after a Syrian air strike.
Source: Mirror.co.uk
Tags:
Events Foreign News Politics Terrorism Tragedy
Tragedy