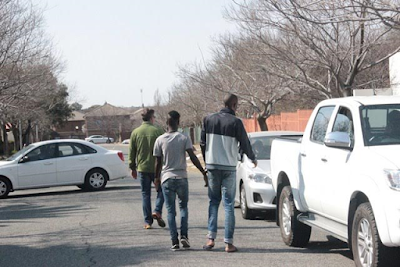 The Secunda District Court in Mpumalanga, South Africa on Wednesday, 5 April 2017, handed hefty sentences to six Nigerian nationals, who were found guilty of manufacturing and dealing in drugs.
Chibuzor Paul Ezekware, Samuel Okafor and Goodwin Addo Abunne were each sentenced to 36 years imprisonment. Henry Ulangu Ukaegby and Innocent Akuziele will spend 16 years in jail each, while Junior Okafor was sentenced to 18 months behind bars.

The National Head of the Directorate for Priority Crime Investigation, Lieutenant General Mthandazo Ntlemeza, has welcomed the sentence, saying the Hawks do not aim to arrest suspect only, but to secure convictions and ensure that justice is served.

“We are clamping down on drugs and all other serious crimes and criminals must be warned that we will send them to jail for a very long time,” said Lieutenant General Ntlemeza.

The suspects were arrested by the Hawks in Secunda and Crime Intelligence on 18 August 2016. (See photos of two of them on the day of arrest).

"The crackdown (called Project 24) on the syndicate came today after 14 months of investigation and gathering of information using unconventional methods,” said Capt Lucy Sekgotodi, provincial spokesperson for the Hawks on the day of arrest.

The Hawks began moving in on the dealers at 04:00 that morning and arrested the seven men at various houses in Secunda and Trichardt.