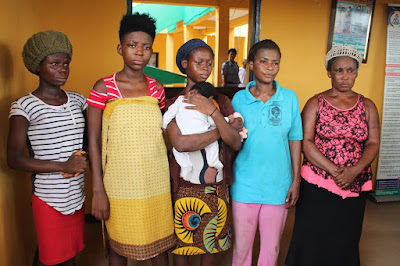 Two teenage mothers have been held by the police in Abia State for selling their babies to suspected child traffickers.

According to the police, one of the trafficked children, a 3-month-old girl, has been rescued.

Other suspects identified as members of a child trafficking syndicate.

The case is one out of 12 cases celebrated by the state commissioner of police (CP), Adeleye Oyebade, in his latest weekly briefing on security situation in Abia.

Newsmakersng learnt that the weekly briefing is part of strategic efforts meant to sweep Abia clean of criminals and show that crime does not pay.

Oyebade also revealed how a quick response by his men had led to the rescue of a 3-year-old girl abducted by kidnappers, and the capture of a notorious kidnapper called ‘Africa’ in a hotel room.

He said, “On May 12, consequent upon information received on the activities of suspected child traffickers, the duo of 17-year-old Ezinne Obiah, and Abigail Udofia, 18, both of Obingwa and Bende respectively were arrested. Upon interrogation, both confessed to have sold their babies to one Esther Arukwe and cohorts residing in Port-Harcourt.

“Then, on May 19, one of the babies, a 3-month-old girl was rescued by detectives attached to the State Anti-Kidnapping Section (D7). Investigation is further intensified toward recovering the other babies.”

He added, “Also on May 19, at about 1730 hours, following a report made at Ogbor-hill Police Station by one Rose Ndukwu that her 3-year-old daughter, Testimony Ndukwu, was stolen by unknown persons, detectives attached to the Division swung into action, cordoned the possible exit routes in the area during which the duo of 20-year-old Chinemerem Isaiah and Chioma Mark, 14; both females of Nkanu in Enugu State and Umuobiakwa Eastern Ngwa respectively were intercepted with the little girl. Suspects were arrested, the child recovered and investigation commenced to unravel the intended buyer/accomplices.”

Oyebade also told how detectives acting on a tip-off on May 21, arrested a suspected notorious armed robber and kidnapper in his hotel room.

The suspect identified as Christian Nnalue aka Africa, was busted by detectives attached to Ndiegoro Division led by the DPO.

Oyebade also paraded suspected armed robbers, cultists and impersonators, during the media briefing held at the police headquarters in Umuahia.

He gave the situation report as: “On May 17, at about 1830hours, upon a tip off, operatives attached to Ndiegoro Division arrested one Chisom Ajaero, a notorious armed robber whose syndicate has been terrorizing Aba and its environs. It is remarkable to note that the suspect, Chisom Ajaero had before now been arraigned in Court on Charges of unlawful possession of fire arms and was released from remand after two weeks. However, the suspect is assisting in the arrest of his cohorts.

“On May 17, at about 1900 hours, one Chidiebere Ugagu aka Toyota, a receiver of stolen vehicles was arrested by operatives attached to Ndiegoro Division upon information at Ala-Oji area in Aba. The suspect has confessed to receiving several stolen vehicles.

One of the recovered vehicles.

“Then, on May 19, at about 0530hours, one Toyota Corolla car with registration number UMA 897 PQ was recovered from the said suspect and effort is intensified toward recovering more vehicles from their respective buyers.

“Similarly, the team had on May 8, at Glass Force Ogbor-Hill, in Aba, recovered one Ford Edge Sport car with registration number GWA 209 TK following the investigation of armed robbery incident that occurred in the State on Easter Sunday.

“On May 19, at about 0350hours, one 21-year-old Obi Nkemakolam was arrested by the same operatives attached to Ndiegoro Division at High Test area, Aba, during which one Tiger Generator and DVD player were recovered. Similarly, one Adiele Enyinnaya was arrested for burglary and stealing, while the duo of Ibuchi Uba and Chibuzor Francis both males were arrested for defilement.

Some of the suspected armed robbers and burglars

“In a related development, the following suspects were also arrested by Ndiegoro Division for various offences thus: Chikwado Isiguzo of Orlu Imo State for car snatching; Chibuike Nwadialo of Nnewi Anambra State; Smart Uchendu of Umuobom, Ideato North Imo State; Ebuka Stephen of Abakaliki in Ebonyi State, and Uchenna John of Abiriba in Abia State all for burglary and stealing.  Suspects will be charged to court as soon as investigation is concluded.

“On May 15, at about 1540hours, one Mrs. Chinwe Okorie was accosted by unknown armed men at Bende Road Umuahia. The hoodlums at gunpoint attempted to rob her of her Toyota Corolla car with registration number BDG 57 CD, but luck ran against them when the woman raised an alarm and they attempted to escape. Operatives of SIB, on routine monitoring, ran into the scene and arrested the duo of David Frank of Omoku, Rivers State, and one Osita Okafor of Umuode Road, in Aba, while one other whose name is given as Kelechi from Port-Harcourt escaped.

Other suspects paraded on Monday.

“A locally made shotgun with three live cartridges was recovered from them. They are being interrogated with a view to arresting the fleeing suspect and discovering other vehicles they have snatched and where they were sold.

“On May 19, at about 1600hours, one brand new motorcycle valued at N250, 000 was snatched from one Chinedu Friday of Abala on his way to Akwa-Ibom State by operatives attached to Ogbor-Hill Division on operational ‘Stop and Search’. The suspect, 25-year-old Usen Kenneth of Ika L.G.A Akwa-Ibom State was also arrested.

“On May 21, at about 1100hours, upon information that a cult group at Amaoji Community in Isiala Ngwa North was planning to initiate new members and disagreement ensued between them and one old member; a patrol team attached to Isiala Ngwa North Division swung into action and arrested the following suspects: Francis Ikechi Nwachukwu, Victor Abel, Ikechukwu Nnabugwu and Ujoatuonu Okechukwu.

“On May 17, upon information received, detectives attached to Ndiegoro Division arrested one Ejike Igbokwe with fake EEDC identity card, while trying to connect electricity. Attention of the EEDC boss in the area was drawn and he averred that the suspect is not his staff. Meanwhile, investigation is in progress to unravel the identity of the EEDC staff, who the suspect said had helped him to procure the identity card.

“On May 21, within the early hours, operatives of Federal Special Anti-Robbery Squad (F-SARS) attached to Owerrinta while on intensive patrol stormed a criminal hideout at Umuojima in Isiala Ngwa South and arrested the following suspects: Chibundu Michael, Obinna Ndubuisi, Emeka Ifeanyi and Solomon aka Oyibo, all males. During a search, one CY 90 lady’s motorcycles and two QLink motorcycles were recovered.

“Operatives attached to Ogbor-Hill Division acting on a tip off, stormed the base of a major Indian hemp dealer and arrested the duo of Paulina George and Ukachukwu George with one food flask filled with the weeds. One 26-year-old Loveday Eduka from Akpaa was also arrested for Arson.”

Oyebade noted that the police were fair, firm and professional in the discharge of their duties, while putting into consideration the core-values of Nigeria Police Force and fundamental human rights.