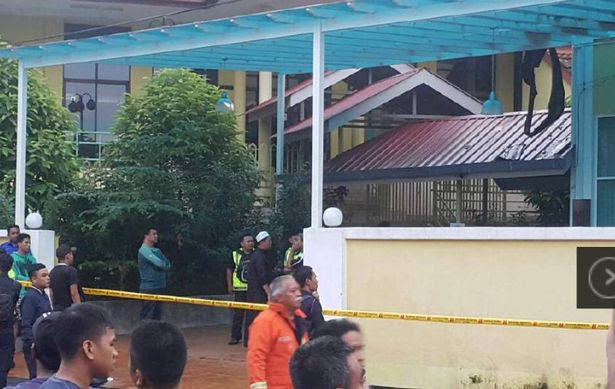 An electrical short circuit is believed to have caused the blaze which broke out in a top floor dormitory, which killed 22 boys aged 13-17 and two staff members


At least 24 people, mainly children, have been killed after a fire tore through a boarding school for boys in Malaysia.
An electrical short circuit is believed to have caused the blaze which broke out in a top floor dormitory, where most of the pupils died.
The fire at Darul Quran Ittifaqiyah, a "tahfiz" Islamic boarding school in Kuala Lumpur where students learn to memorise the Koran, was reported around 5.40am local time.
The death toll stands at 22 students and two wardens, the Malaysian Fire and Rescue Department confirmed.

The blaze began in the sleeping quarters on the top floor of the three-storey school building, officials said.
Kuala Lumpur police chief Amar Singh told reporters the boys who died were aged 13-17, and that they were probably suffocated due to smoke inhalation.

The dormitory had only one entrance, leaving many of the victims trapped inside, he said.
Some witnesses said they had heard the students crying for help after the fire broke out.

"They're still counting the bodies, which were piled on top of each other in a corner," Singh said.
Hundreds of people, including families of some victims were gathered outside the school, as more bodies were being removed by fire officials.

The police chief said no foul play was suspected.

Abu Obaidat bin Mohamad Saithalimat, deputy director of the fire department told reporters outside the school that the fire was likely caused by short circuit.

Seven people were taken to a nearby hospital for injuries, while 11 others were rescued, officials said.
Tahfiz schools, which are unregulated by the education ministry and fall under the purview of the religious department, have been under scrutiny since earlier this year when an 11-year-old boy died after reported abuse in Johor, north of Singapore.