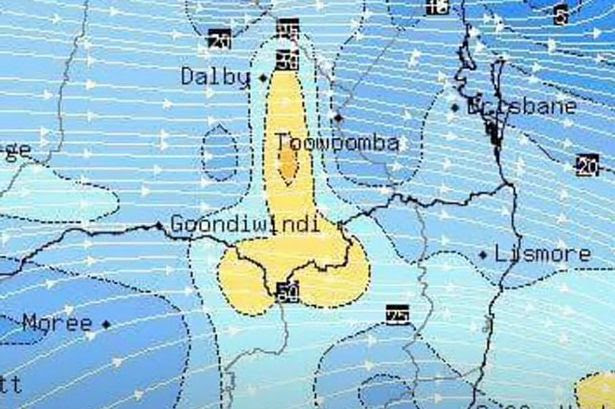 A weather map in Australia has attracted giggles after appearing to forecast a giant pen!$.

The phallic -like formation was spotted on a satellite image of Queensland by local Nicko Mickle when he was checking the weather conditions this week.

"Looks likes old Toowoomba is about to cop a floggin' too."

Toowoomba, a town in southeast Queensland west of Brisbane, appeared to be directly underneath the member.

Nicko shared the image from a weather website with his friends.

The Chronicle newspaper in Toowoomba reported Nicko's image had generated a lot of interest in the town which has a population of 110,000.

A spokeswoman for the Bureau of Meteorology in Australia said they did not believe the map was "generated by the Bureau, although it may have been generated from Bureau data".