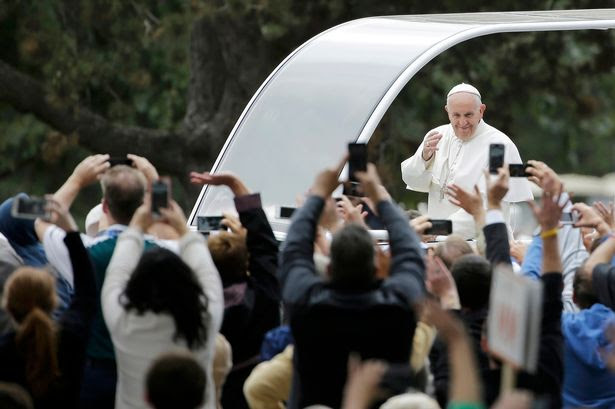 An American teenager has admitted to plotting to assassinate the Pope in a sniper shooting.

Santos Colon, 17, planned to shoot Pope Francis in 2015 during a public Mass in Philadelphia before setting off multiple bombs in the area.

The teenager from Camden, New Jersey,
faces 15 years in prison.

He was caught by an undercover FBI agent who posed as the potential sniper.

"Colon engaged in target reconnaissance with an FBI confidential source and instructed the source to purchase materials to make explosive devices," prosecutors said in a statement on Monday.

Some local media have reported Colon was inspired by the Islamic State.

"There is no mention of ISIS or any specific organisation in any of the court papers or in any of the factual basis questions he was asked in court during the plea hearing," Reilly said in a email.

A U.S. citizen from Lindenwold, New Jersey, Colon was charged as an adult on Monday with one count of attempting to provide material support to terrorists.

He faces up to 15 years in prison and a fine of $250,000, or twice the amount of any financial gain or loss from the offense, prosecutors said. No date has been set for sentencing and the investigation is ongoing.


Colon's attorney did not immediately respond to a request for comment.

The Pope visited Philadelphia on September 26 and 27, 2015, to hold a public Mass, attracting hundreds of thousands of people during his biggest event in the United States.

The Archdiocese of Philadelphia spokesman Kenneth Gavin expressed gratitude in an statement on Tuesday to law enforcement "who worked to provide a safe atmosphere for the Holy Father and those who traveled from around the world" during the event.