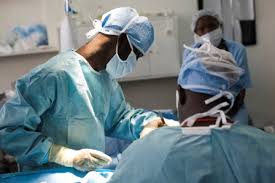 THE Senate has promised to investigate the allegations of mass failure by foreign trained medical doctors, who recently sat for the Medical Dental Council of Nigerian assessment examination at the University of
Ilorin Teaching Hospital.


The Chairman, Senate Committee on Health, Senator Olarenwaju Tejuoso gave the assurance when aggrieved doctors, in company of some of their parents, paid him a visit in Abuja.

In an exclusive chat with Vanguard, one of the aggrieved doctors, who craved anonymity said the lawmaker promised to take their grievances to the Health Committee of the National Assembly for thorough investigation. The doctor said: “At the meeting, we told him of the lack of organization and coordination of MDCN during lectures for the assessment and the eventual release of our results marred with irregularities.” “Sen. Tejuoso then vowed to take the matter to the Committee on Health for proper investigation. He also promised that justice must be done to the Foreign Trained Doctors,” the source said.

Some of the alleged irregularities listed included: lack of coherent preparation for the students; no cohesive curriculum and baseless marking scheme; high cost of verification and registration fees including a last minute change of questions by the MDCN and the stress they went through in the course of three months’ preparations for the exam among others.

Reacting to the allegation, President, Nigerian Medical Association, NMA, Prof. Mike Origima, said “I am aware of some allegations of the foreign trained doctors on social media. But the doctors have to channel their grievances properly and in the right channel.”
Source: Vanguard News
Tags:
Education Health Local News
Local News