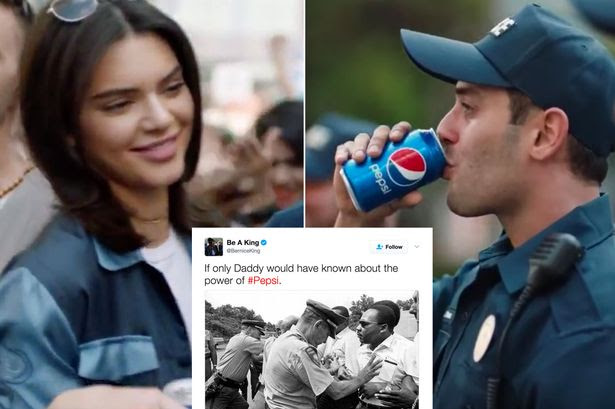 Source; Mirror.co.uk
Martin Luther King Jr.'s daughter has criticised the controversial Pepsi advert which stars Kendall Jenner.
Bernice King took to Twitter on Wednesday
to blast the ad that has been widely branded "insensitive" and in "bad taste".

She wrote: "If only Daddy would have known about the power of Pepsi."
The same day, Pepsi announced it was pulling the ad and also issued an apology to Kendall in their statement.
The apology from the soft drinks company read: "Pepsi was trying to project a global message of unity, peace and understanding.
"Clearly we missed the mark, and we apologise. We did not intent to make light of any serious issue. We are removing the content and halting any further rollout."
They continued: "We also apologise for putting Kendall Jenner in this position."
The brunette is said to be hugely embarrassed by the controversy, with a source telling People magazine: "Kendall would have been absolutely mortified. Anything offensive is just not her. She means well, always.
“She would have called Kris so upset and freaking out. And then Kris would go into mum mode and approach it like, ‘Let’s do something about this, now.’”
The new advert starred Kendall as a high-fashion model, donning a blonde wig in the midst of a protest .
It wasn't clear what the protest was supposed to be about - many of the signs read general phrases, including "join the conversation" and "love."
Beckoned by one of the protesters, Kendall eventually ripped off her blonde wig and joined the fray.
Grabbing a can of Pepsi, she headed toward one of the grim-faced police officers, and handed him a drink.
He accepted and smiled, eliciting cheers from the crowd.
It's hard not to compare the image of Jenner handing the can to the police officer to the award-winning photo from a Baton Rouge, Louisiana, protest against police brutality last July.
In it, Ieshia Evans can be seen, calm and collected, offering her hands for arrest to a group of riot-gear-clad police officers.
In the YouTube description for the commercial, titled "Live for Now Moments Anthem," Pepsi called it "a short film about the moments when we decide to let go, choose to act, follow our passion and nothing holds us back." It featured "Lions" by Skip Marley.
Following the release of the ad, Pepsi quickly began trending in the US on Twitter, as many social media users ripped it to shreds.
Reactions ranged from humorous jabs ("Hi, I'm Rachel Dolezal for Crystal Pepsi") to calls for whoever greenlit the commercial to be fired.
One person posted on Twitter: “Kendall Jenner Pepsi ad summarized: The Revolution Will Be Televised as a Beautiful People Rave With Police as Benevolent Security Guards.”
Another joked: “I never knew one can of pepsi could end police brutality wow thank god for kendall jenner”, while another simply said: “That Pepsi ad with Kendall Jenner is a real mess ... so much wrong with it.”
One person summarised: “Their new ad campaign is Kendall Jenner showing up at a BLM protest and handing a police officer a Pepsi and suddenly he’s happy. Bad taste.”
A spokesman for the soft drinks company originally said: “This is a global ad that reflects people from different walks of life coming together in a spirit of harmony, and we think that’s an important message to convey.”

Ivanka: there! Now absolutely NOBODY can produce something more tone-deaf than me today
Kendall: hold my Pepsi
— Fred Smith (@fredwordsmith) April 4, 2017