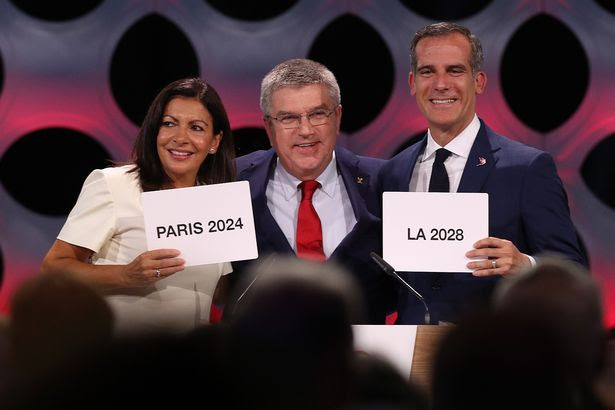 
Paris and Los Angeles will host the 2024 and 2028 Olympic Games, the International Olympic Committee confirmed in Peru.
It was hardly a decision for the IOC to make their historic move to grant two Summer Olympics at once.
The deal-making was done after a year's worth of dealmaking by IOC president Thomas Bach, who had only the two bidders left for the original prize, 2024, and could not bear to see either lose.
Both cities will host their third Olympics.
The Paris Games will come on the 100th anniversary of its last games - a milestone that would have made the French capital the sentimental favourite had only 2024 been up for grabs.
Los Angeles moved to 2028, and will halt a stretch of 32 years without a Summer Games in the United States.
Paris has declared a budget of $8.09 billion for their Games after failing bids for 1992, 2008 and 2012.
The 2028 Games in LA will have a US$5.3 billion budget, which follows, will essentially follow the plan they had in place for 2024, including housing athletes at the UCLA campus.

ADVERTISEMENT
LA have been handed an extra £227 million for making their compromise.
Doing away with the dramatic flair that has accompanied these events in years past, there were no secret ballots and no dramatic reveals at the end of the voting.

Mr Bach simply asked for a show of hands from the audience, and when dozens shot up from the audience, and nobody raised their hand when he asked for objections, this was deemed a unanimous decision.
A ceremony that has long sparked parties in the plazas of winning cities - and crying in those of the losers - produced more muted, but still visible, shows of emotion.

Paris bid organiser Tony Estaguent choked up during the presentation before the vote.
"You can't imagine what this means to us. To all of us. It's so strong," he said.
Later, Paris mayor Anne Hidalgo stood by Mr Bach's side and dabbed away tears as the vote was announced.